Ethical standards are fluid. For instance, in some countries it is ethical to kill an adulterer (someone who cheats on their spouse), in America (and many other countries) this is unthinkable, unethical. This applies to American culture as well. Look at same-sex marriage, in many states it is still illegal, unethical, while just acrosse the state line one can be legally, and ethically married.ETHICS AND THE LGBTQ COMMUNITYEthical standards vary from community to community, business to business and even street to street. LGBT folks are not the exception. We too are still defining what labels are ethical, like the symbol of the pink triangle. This symbol was assigned to homosexuals in nazi concentration camps and were killed right alongside everyone else. Today, some find this symbol a sign of homosexuality in a positive sphere while others are staunchly offended by its usage.This applies with the use of the word faggot, queer, homo, lezzie, tranny, male, female, cis, non-cis, dike or whatever other term you can think of to describe one of us. For some these words are tyrants in their lives and act as a prison to confine into separate spaces other than normal. Others, like the fact that they are existent in those “separate spaces.” WHICH IS ETHICAL: USE THE TERMS OR NOT?If we remember that ethical standards vary from one person to the next on pretty big issues, like Democracy, then it should not come as a surprise that ethical terminology is also a stumbling block.For me personally, I use these words to describe myself and have no inner guilt or shame in doing so. I like the idea of removing the negative power it was intended to have. Yet, I recognize that coining myself as a minority group can have disastrous consequences on my social, business, and interpersonal life. CONCLUSIONSo long as I am Jeff, the queer, I will be Jeff, the queer and not Jeff, the person. Nobody introduces themselves as “Hi, I’m so and so, super straight.” It is assumed this is true already. Until we differentiate ourselves by title. One day, ethical treatment will mean the Lesbian, Gay, Transgender, and Bisexual will by synonymous with normalcy, right along with Heterosexual and straight and the term trans and cis will be used only in history books.Until then, ask what someone prefers and then…shocker, accept it and be sensitive to it. Love one another and be kind.With LoveJeff “Jeffebelle” Utnagewww.lgbtqprisonsupport.com 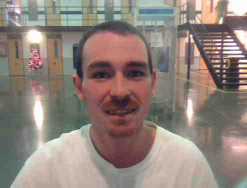