“expert” spews statistics in an audibly legible format. Stats get applied to a whole group of people when it couldn’t be further from the truth. Suddenly someone who is completely rehabilitable has stats misappropriated to his or her current state and then experts conclude some nonsense based on information applied elsewhere. I want so badly to give a recent example that happened to me but it simply isn’t smart to do so. I will ask you this, is it possible to conclude my recidivism probability after 4 minutes of someone else talking? Rehabilitation of inmates is an enigma to experts. To those that need rehabilitation its much simpler, provide a consistently safe place to reflect inward, remove authorities that are bias, provide qualified help and we do the rest. First, if you walk into a place and you feel threatened you’re not contemplating your immoral behavior. Second, if the body language of those in authority over you is intimidating and mistrusting you will almost always react in a way that seeks to get away from those individuals making trusting dialogue impossible. Third, overloading the caseloads of psychiatrists and mental health personnel renders it near impossible to give accurate therapeutic care because you cannot possibly consider a lifetime of experiences and likely future behavior of a human being from a one-time 30 minute conversation once a year.I know that certain crimes are stigmatized as lifelong concerns, like sexually-based offenses. Sex offenders are the acceptable target for society at large to openly despise. This has caused some of the most intensive psychological treatment available, treatment that when someone is involved in requires a great deal of concentration and vulnerability and to be frank, its pretty effective.The truth is SOME folks aren’t going to change whether they are gangsters, drug addicts, thieves, murderers, or rapists. But many do. The change comes from a place self-discovery and inmates can spot someone who is truly changing their lives from a mile away. We know who is dangerous, we know who is definitely going to commit another crime, and we know who has their act together. We know this because we are around one another constantly where the masks shown will eventually fall or fade not for a one time 30 min meeting where the notes of what happened were probably written before we got there to save time. When you hear someone has been incarcerated, ask them one simple question: How have you changed and what did you do to get there? The answer to this will reveal so much. Genuine change comes from genuine action and belief. I am not a danger to society or anyone in it, a bag of shortbread cookies on the other hand…now that’s another story. Subscribe, Follow, Interact, Comment and change YOUR community.With LoveJeff (aka Ruth) Utnagewww.lgbtqprisonsupport.com 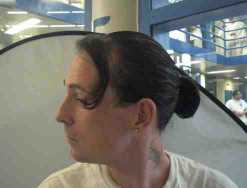