Some of the people around me have a real issue with my femininity. In their mind its a facade and the more aggressive side of me is the real me. Mainly because they associate that with masculinity.
In prison one cannot just walk away from a social group. If one person does something idiotic they may be ostracized or something, but they really cannot go anywhere. So whoever you talk to, which is typically everyone you live around, you better make concessions because otherwise your gonna be one angry individual. So, I have crappy “friends” because my options are limited.
Danner Jeff, who is this? There are a brand of boots called Danners. I had a pair before I fell. I was 300 pounds, had a shaved head (usually), wore Carhartts and Danner boots…everywhere. I was angry and moody, when I wasn’t those it was when I was by myself and dropped all that garbage to be me, just for a few minutes. A habit I developed from a young age. That alter ego, who wore Carhartts and Danner boots, is Danner Jeff.
I despise him. I worked so hard to be rid of him and he only emerges when I must break my feminine poise, my happiness, and become aggressive to protect myself.
What irritates me is that I am nice, I don’t judge people, I accept them as they are. Right now, this minute. Even if I know they are lying, I at least understand the lie is who they want to be. I will nurture that, because I am a good friend.
Something occurred to me the other day regarding alter egos. Danner Jeff, is still Jeff. Jeffebelle is still Jeff, they are not separate individuals, they are the same individual with one personality. Its my “friends” who lack understanding. Let me explain.
Just because one is feminine does not mean they are not competitive. When I lift weights I am called Danner Jeff. When one is in danger and successfully intimidates the aggressor away, this is associated with masculinity and Danner Jeff. Strength, fitness, emotional stability, even loyalty is all associated with masculinity. This is so sad and complete nonsense.
Because I am happier being sensitive and soft and non aggressive, I dislike aggression in all its forms, I am feminine? The traits of masculinity are anger, competitiveness, loyalty, honor? Meaning if a women possesses these traits she is masculine?
Well, I reject that as truth. So while I am glad you got to meet my despised Danner Jeff, I am happier to announce that bastards dead and I’ve really just been a badass Jeffebelle this whole time.
Feminine, masculine…I reject them both. Our world, my world goes beyond these close minded and limited ideals, these tiny boxes. I Iive in a giant, infinite Multi-Verse with endless combinations and possibilities. Everyone can keep their gender identities, I truly do not need them.
With Love
Jeff ‘Jeffebelle’ Utnage 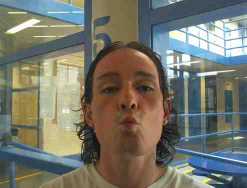