Creating a family is important to me, especially when I lost most of my own. Once I was out n’ proud I wanted to wrap myself in the LGBT community, it was home for me, still is. I find myself married to the LGBT community, I would do things for them that I wouldn’t normally do, extending courtesy and patience not normally given, giving preference to my LGBT brothers and sisters over almost everyone to be honest, I don’t feel bad about it. These people I have immersed myself with understand my entire being, no lengthy explanation required. When someone calls one of my trans sisters a him, we all feel cut by it, not a word need be said. However, I have straight friends too, and recently one of them has spoken up about feeling ostracized. The idea of a straight white male feeling ostracism is strange for me to conceptualize. Nevertheless, he is a friend, and a good one at that. He would do things for me that many cannot comprehend, even in the LGBT community. It took me a minute to actually witness his ostracism, but I did see it. It took place during a moment where the LGBT community was preparing for an LGBT event. Now, when your planning an African American event, it makes sense to have African Americans plan the event, right? That’s the concept with LGBT events, who better to plan an event for LGBT folks than…LGBT folks. There was some talk about only LGBT people planning, which I understand. But that word, only, that’s the ostracism. Straight’s only, white’s only, rich only, member’s only. The word only meant exclusion, if your inside the group you matter, but if your outside your opinion means less than. Folks, I believe that’s called discrimination. This doesn’t mean I’m all about changing things, LGBT people have been forced into silence for so long by so many groups of “only’s” that I find it hard to sympathize. I feel like saying, “Hmm, discrimination doesn’t feel so good, does it?” Saying it more like a warning to make sure he never does that to someone else.Allow me to step off my high and mighty horse for a moment though and present a simple argument. I want to experience the world, I want other cultures to allow me to witness what makes them happy, participate in their joy. Isn’t that what he’s asking for, that experience? How will we know our impacts on the straight community if we never bother to include them or ask? Most of us are pretty good about inclusion, mainly because we know what hatred and “only” means, we’re conscious to not make others feel that.I’d love to hear your thoughts! Comments anyone?With LoveJeff “Jeffebelle” 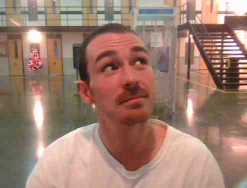