I am considered a leader in my community. I am told this all the time by people around me. Something that goes along with that is people want your “position” ( I use quotation marks because being a good friend and not being a douche bag to everyone around you shouldn’t constitute leadership, but whatever). This is true of any position that has implied leadership. Leadership must remain vigilant and thick skinned to handle the pressure and character attacks that go along with its roles. It really is ‘part of the job’ and I have little sympathy for those who ask for it. Find something else to do with your life if somebody wanting what you’ve worked for bothers you. You understand. However, there is one type of person that worries me, the mentally unstable. By unstable I mean psychopathic. The kind that obsesses over you, whenever they get around you they interrogate you with a bombardment of questions, the try to corner you conversationally in an attempt to get you to provide some sort of pathway into your job…your role. The kind that is wholly unqualified and unwilling to make the necessary changes intrinsically to be a good leader or person. The kind that has earned the reputation of a snake and has gotten what little they have through manipulation of the meanest kind, payoffs to leave you alone and bite into somebody else. There is one little element of importance here, as suggested by the title, what if we are also a difficult person? Not in the same way, a different kind of difficult. Maybe we are closed to new relationships because we are a little too vigilant. Maybe we are so regimented that new things are intolerable. Who knows, maybe we can be flat out unapproachable unless we have our “political charmer” activated. What then? Are we creating more problems for ourselves?I am dealing with someone who is unstable and believes I have some sort of authority, which isn’t true. But even if I did, I certainly wouldn’t trust him anything. He is a psychopath, he believes he understands the human psyche and claims he is the ultimate in knowledge about all things homosexual. This same guy also has a thing for choking tranny’s, been doing it since 1983. I was born in ’82. Here’s my advice for anyone dealing with similar situations, even if they aren’t as drastic. Be public about such things. Talk to your team, your support system and your upper leadership about what to do in order to protect yourself and others while being sensitive to someone who is unstable. Make sure the person understands that nothing they say will be kept private by you, every action, every letter, every email and conversation. This will limit their ability to corner you and their desire to interact at all. If you have anything to add or any advice or your own story to share, I’d love to see it shared!With LoveJeff “Jeffebelle” Utnagewww.lgbtqprisonsupport.com 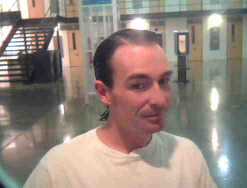