Putting The Whole Compound In Cycle: Who's The New Girl? by Ruth Utnage

Who's the new girl? Me! Sometimes a girl needs to turn up and let herself know that she can still take the breath out of a room. In one of Beyonce's songs she says "world stop...now carry on", that, sometimes we need to do that.

The other day I had a friend put my hair into two braided buns on the top sides of my head. Basically pigtails that were braided, put into a bun, and I tied a bow around each one...because your girl is a motha effin present! The first comment I got was from a trans girl, seconds after it was done, I hadn't even looked in the mirror yet and she began ridiculing me, she got super ugly! So, of course, I knew she was just jealous and that I was looking fierce. I knew I was pulling the look off. The second comment was from my friend Rory and he said "you look good, in fact, good enough that you're kinda outta pocket for it." And by that he means that I am being unfair to the male population.I spent the rest of the day thinking that people were mad at me. Nobody would make eye contact with me, not even staff. They would just stare. I am a pretty tough chick. I do well when I'm in a room of people who look angry, I have survived a decade in prison, after all, but this was all of a sudden. I kept thinking "damn, I put my hair up and finally think I look pretty, my self esteem was never higher, and everyone begins to not like me, go figure". I was beginning to think I was delusional, like maybe I didn't look good. I walked with my head held high, and since I figured a hair style shouldn't determine my likability I walked with my hips switching, because I can. Because eff 'em all, that's why.So I spent the day thinking I was suddenly not liked and that evening I'm sitting with one of girls and she makes a comment about me putting the tier in cycle, which is a reference to turning everyone on. I told her she was wrong that nobody would even talk to me anymore.That's when she corrected me. "Trust me, they're talking, the whole wing is talking about you, look at all the empty seats, they're empty because they're all inside their cells...you know...handling business and calling out your name."Oh, well, since you put it that way.Then I went into my cell for the night and my cellmate, who works in the kitchen says to me "You're out of pocket for that hair girl. The whole compound is talking about you. We were in the kitchen and everyone stopped working to peek out the small window to catch a glimpse of the new hottie that just showed up. So of course i'm peeping too and guess who I see? My damned Sister! Girl, you got everyone so keyed up, even the cops was trippin'."That made me feel good.Sometimes a girl just needs to turn things up a bit. I'm an intelligent, sexy, warm, and good person and a catch and anyone who passes this good stuff up is gonna see me and think "Damn, I made a mistake." I want to make those who rejected me once to rethink their decisions. Yeah, it's like that.With LoveRuth 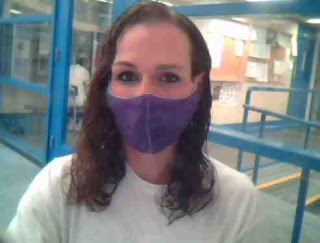